History of the Office of Sheriff

Around 500 A.D., Germanic tribes from Europe (called the Anglo-Saxons) began an invasion of Celtic England which eventually led, over the centuries, to the consolidation of Anglo-Saxon England as a unified kingdom under Alfred the Great late in the 9th Century. Alfred divided England into geographic units called "shires" (or counties). 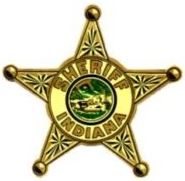 In 1066, William the Conqueror defeated the Anglo-Saxons and instituted his own Norman government in England. Both under the Anglo-Saxons and under the Normans, the King of England appointed a representative called a "reeve" to act on behalf of the king in each shire or county. The "shire-reeve" or King's representative in each county, became the "Sheriff' as the English language changed over the years. The shire-reeve or Sheriff was the chief law enforcement officer of each county in the year 1000 A.D. The Sheriff still will have the same function in Indiana beyond the year 2000 A.D.

Indiana's first constitution, adopted in 1816 when Indiana joined the Union, created the office of Sheriff as an elected official in each county. The concepts of "county" and "Sheriff' were essentially the same as they had been during the previous 900 years of English legal history. Because of the English heritage of the American colonies, the new United States adopted the English law and legal institutions as its own.

Indiana's constitution of 1851 also included the creation of the office of Sheriff in the same form as the 1816 document. Constitutional amendments in 1948 and 1952 have changed the term of office of the Sheriff; but the constitutional provisions establishing the office itself remains the same as it was in 1816, which in turn is strikingly similar to the functioning of the office of Sheriff at the time of Alfred the Great and William the Conqueror. The major difference, of course, is that the Kings of England appointed their Sheriffs. From the earliest times in America, our Sheriffs have been elected by the people to serve as the principal officer of each county.
Facebook
[]