Create an Account - Increase your productivity, customize your experience, and engage in information you care about.

Generally speaking, a jury may he called upon to try two kinds of cases - civil or criminal.

A civil case is an individual dispute between two or more persons or corporations and, ordinarily, but not always, is for money damages. The party suing is the "plaintiff," and the party sued is the "defendant."
In a civil case, a person who brings the suit against another does so by setting out his claim in a written "complaint." The person being sued may dispute the claim by filing an "answer." The function of the jury is to return a verdict either for the plaintiff or for the defendant.

In a criminal case, the action is brought in the name of the State of Indiana, as "plaintiff," against the person charged with a crime, who is called the "defendant." The defendant is brought before the court either by an "Indictment" or an "Information." If the charge is brought by a grand jury it is known as an Indictment. If the charge is brought by the Prosecuting Attorney, it is known as an Information. If the defendant admits the charge, he or she does so by entering a plea of "guilty." If the charge is denied, a plea of "not guilty" is entered. In criminal cases, the jury will be called upon to decide whether defendants are guilty or not guilty of offenses with which they are charged. 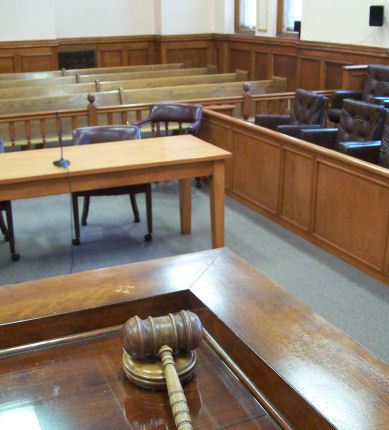 In most cases in Indiana, the punishment to be imposed on a convicted defendant is determined by the judge rather than the jury. In death penalty and life without parole cases, however, the jury hears evidence about punishment and makes a binding sentencing recommendation.
Facebook
[]